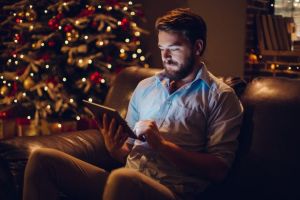 The national clinical director says “there is absolutely no question” of big family gatherings being allowed. “That is fiction this year.”

The only fiction apparent here is Mr Leitch’s belief that his words will carry the weight that he seems to attribute to them.

He has been an ever present feature on our TV screens for months now. For some considerable time he was a figure of substance and someone people listened quite closely too. Now he sounds like just another droning bureaucrat.

I’m not a fervent fan of Christmas, the kind of person who saves up monthly throughout the year for a Yuletide party and gift buying splurge.

But it is a pleasant interlude which breaks up the long winter months, and Christmas day itself remains quite special.

The idea that December 25 celebrations are now going to be conducted exclusively on Zoom or wherever is fanciful, if not complete fantasy.

Leitch is right to say that “big” gatherings – whatever number that might refer to – will probably be curtailed.

I imagine most people will not be inclined to have their homes packed to the rafters and that some subtle limitations will be placed on the numbers meeting up on Christmas day.

But any idea that the “rules” will be followed to the letter by people across the country is preposterous.

Immediate family members will still gather to celebrate regardless of whatever Jason Leitch demands and Nicola Sturgeon decrees.

No doubt they will reinforce their warnings in early December by cheerily telling people that any breach of “the rules” could result in those around the Christmas dinner table being responsible for killing each other.

Sturgeon will preface this statement by saying: “I want to be straight with you…”, the increasingly tiresome introduction she uses all the time now.

But for this one day, at least, the vast majority of people will turn a deaf ear and get on with Christmas as normal.

The utterly miniscule risk of catching the virus at a modestly sized gathering of eight or 10 people will be nothing as compared with the risk of being consumed by feelings of alienation, frustration and outright despair if the world we are living in is so hostile and desperate that even Christmas “is cancelled”.

In general, these increasingly confusing and contradictory rules are still being followed, and still should be followed.

But the fact is that the patience of many people in sticking to them is wearing very thin.

Eight months after all this began we’re close to being back to where we started.

Restrictions, local lockdowns and enforced closures have crippled businesses or closed them altogether. And tens of thousands of people have been thrown out of work.

And virus figures have spiked higher than ever.

Some media outlets persist in peddling the myth that the vast majority of people still have firm or even absolute faith that Nicola Sturgeon has had “a good virus” and still knows what she’s doing.

It’s not clear where that comes from. The people I speak to – regardless of political persuasion – think she doesn’t know what do anymore and is making it up as she goes along.

Neither she or Jason Leitch can step up and publicly admit that. But it’s the widespread perception.

But in that context the grave “Christmas is cancelled” warning will ring very hollow.

About as hollow as a 12lb turkey ready to have a pile of sage and stuffing crammed up its basted backside.