PARTY animals have had a particularly boisterous time in the Highlands during the pandemic. That is, until the revelry has been rudely interrupted by police officers definitely not in party mood. 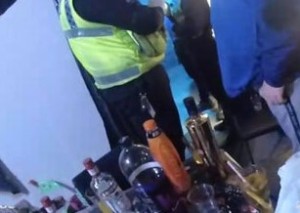 In this region a total of 313 incidents have been dealt with, and more than 180 people have been fined. That’s almost as many as in Aberdeen City, Aberdeenshire and Moray combined.

There is no monthly breakdown revealing whether these incidents are now tailing off, but they certainly should be.

When the pubs were closed for months last year it was predictable that people would gather in their homes for boozing sessions and as the number of infections in the Highlands dropped to tiny numbers this may not have ranked too highly in the misdemeanour ratings.

But that has completely changed with the new mutant strain surely being the biggest party pooper of all time.

The police have never had a killjoy role, they have just been doing their job.

But with the new strain of the virus so far proving unstoppable in the Highlands as much as everywhere else the time for socialising over drinks with pals and a gatecrasher or two is well and truly over.

After moving from near the city centre I now live in a quiet neighbourhood where by comparison it seems everyone goes to bed at 10 o clock. And that’s no bad thing either.

But if I was living within earshot of the sound of clinking glasses and raucous laughter from an excessive gathering of people I’d be on the blower to the police faster than I’d call emergency services if my house was on fire. No ifs, no buts, no making allowances, no hesitation. I’d grass ‘em up and feel a surge of satisfaction when I saw cop cars arriving on the scene.

The evidence is all too clear that this strain of the virus is far too dangerously contagious to mess around with. And certainly at illicit household parties where drink is flowing freely. Some of these potential super spreader events may still be taking place. If so you don’t need to be a responsible citizen, far less a “snooper” to report them. You just need to have half a brain, which would be half a brain more than those attending these things have.

The pubs will remain closed until the vaccine becomes widely available, that’s a certainty. The option of arranging parties to compensate is now no option at all.

Now their level of tact should be one furiously loud rap on the door and after that it comes off its hinges.

The incident figures for the Highlands in comparison with other areas do not make good reading.

Anyone still in the mood for an illicit party should be made well aware that noisy, drunken high jinks are going to lead to people being led away in handcuffs, an outcome which would be very well deserved.

One thought on “SILENCE THE SUPER SPREADERS: After shameful illegal party figures are revealed as mutant strain runs rampant, household high jinks should end with people being led away in handcuffs”