THE vast majority of people are not greatly interested in politics just now as we drag ourselves through this bleakest and grimmest of all winters, and not too many are dwelling too much on the May elections, either, I strongly suspect.

Opinion polls suggesting majority support for breaking away from the UK have been trumpeted by nationalists but one finding was conveniently overlooked. Another referendum was ranked as only sixth in the priorities of those polled. Given the dire and worsening circumstances we’re in does that ring true? People have so much else on their minds, and in some cases virtually overwhelming them. 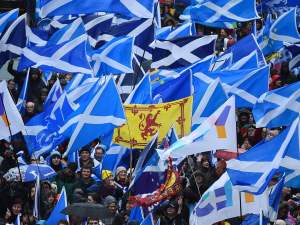 But SNP politicians are determined that the Scottish Parliament poll in May goes ahead as scheduled, despite a push from other parties to have it held back by even a month, so that the focus can be targeted like a laser beam on mass vaccinations.

It’s difficult to see what the likes of SNP leading lights Mike Russell and Ian Blackford, who insist another referendum MUST take place this year, have against an elections delay.

Not only would it help save lives – and surely even they take some cognisance of that – it wouldn’t derail their plans and ambitions by all that much.

Instead of being an independent nation by, say, October, we’d be free from being under the boot of the English oppressor by November.

After waiting 300 years, we can surely wait another month.

This scenario does depend on some expectations by the SNP that are not exactly rooted in concrete. But let’s for the moment assume that the “freedom” vision of Blackford, Russell and Co is not grotesque fantasy but is in fact based on reality.

An election is held in May despite the coronavirus crisis and the SNP win a majority.

They then demand a section 30 order from Boris Johnson to enable another referendum. He immediately, albeit rather unexpectedly, caves in on all his previous pledges to deny indyref2.

This shocks and stuns those opposed to a break-up of the UK and in their eyes he instantly becomes a traitorous pariah, but the SNP/nationalists are really on a roll.

Nicola Sturgeon stands at her podium in June and declares the vaccination programme is going fantastically well so people will understand if she has to take time off, saying: “I want to be straight with you. I will, despite other essential commitments, keep a really close eye on the progress of the rollout.”

She then disappears from public view to engage in a series of brainstorming sessions with senior colleagues to resolve the issues of what currency an independent Scotland would use, the impact on savings and mortgages, a hard border with England, Scotland having the biggest deficit in Europe, how we would compensate for the loss of the extra £2,000 in public spending we receive for every man, woman and child compared with  people in England, and who would pay our pensions. By some miraculous process, answers to all these questions would be produced in a matter of weeks after six years when they haven’t made progress on any of them.

The answers to these overhanging questions would then be presented to the Scottish public, and while a considerable number of people would have doubts, these answers would be accepted as a necessary gamble to take by a majority of people prepared to risk their entire financial future on them – householders, pensioners, EU sceptics, English voters and business people up and down the land. Ian Blackford would remind people that he has a lot personally at stake in this as well, namely the economic future of his 10 acre Skye croft.

The pandemic referendum would take place in November, there would be a majority vote for independence and the English tyrants would forever be banished from our misbegotten, perpetually downtrodden lives.

Refusing to be a killjoy amid the exultant mood of jubilation among nationalists Nicola Sturgeon would deny to the death that the nearly year-long focus on independence had been in any way detrimental to the vaccination programme. That claim, at the very least, would be a certainty. She would, of course, want as always to be straight with us.

So that is how 2021 could pan out for those who insist elections and a referendum must be held during the worst health crisis for 100 years.

Under this scenario we WILL be independent by November instead of October. But the SNP should agree to postpone the elections by a month. They are certain FREEDOM can be achieved in 2021. They can therefore afford to be generously flexible about the month when Scottish, international and world history would be made.

There are those who would say the fanaticism of Russell, Blackford and nationalist hardliners to hold and win a referendum during this pandemic year is the product of disordered if not cruelly deranged minds. The only thing I would say about them is, don’t you at least admire their echoes of Trump-style manic optimism when he declared almost exactly a year ago about the virus itself – think positively and all our problems will magically disappear?

One thought on “Nats have only virus, vaccine, currency, pensions, mortgages, border, EU – and Boris – between them and FREEDOM in 2021”