THE barriers surrounding the Riverside site where the ridiculous Gathering Place is being built don’t cast a shadow over the adjacent Bught Park, but they should.

The Bught is the latest target for potential redevelopment by the council. 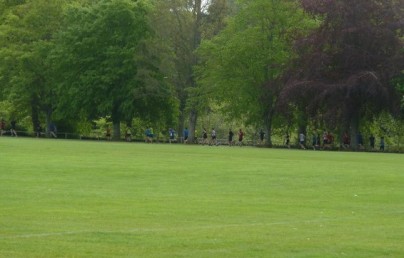 And after the prolonged and ongoing riverside travesty just across the road from it, people should be wary about what happens next at the Bught.

The Bught is a beautiful open space of greenery which, like the riverside is cherished by people because it is open, spacious, green and untouched.

The riverside that a clique of councillors couldn’t keep their meddlesome hands off.

And we’ve seen all too clearly what a fiasco that turned out to be.

Concreting over the Gathering Place site with a worthless wall and pathways was a big enough blunder.

Messing about with the Bught could, in terms of scale, be much worse.

According to the Inverness Courier nine potential options – ranging from no change to an indoor athletics centre – have been discussed as part of a review funded by Highlands and Islands Enterprise and the council, which owns the land.

Proposals are based on assessments of how to best use the park, as well as the current standard of facilities and usage.

The options range from doing nothing to ambitious suggestions for flood-lit sports fields hosting everything from shinty, hockey and American football to a stadium extension and improved infrastructure.

Malcolm Macleod, the council’s executive chief officer for infrastructure and environment, said: “Current facilities are ageing, not fit-for-purpose and do not meet modern day standards.”

“Bught Park is a high-profile strategic asset for the city, and the current condition/quality of facilities do not reflect this.

”Other proposals that have been discussed and rejected included separate options for full-sized floodlit synthetic grass shinty and football pitches.

Two other options to be dismissed include a tennis centre with four indoor courts and an indoor athletics centre with a 70-plus metre indoor straight. These were deemed to face planning permission challenges and strong resistance to the loss of green space.

One option that “should proceed as a minimum” according to those involved would see basic maintenance and upgrade work done – not to do so risks leaving the facilities unusable, Mr Macleod warned.

That would mean an investment in the existing stadium, upgrades to the changing blocks and grandstand to make it more accessible and comfortable, a full fire risk assessment, and installing CCTV.

If these proposals are limited to improving the rickety old stand there and the facilities within them that has obvious merit.

The proposals already rejected – indoor tennis courts and an indoor athletic centre – would inevitably eat into the expanse of open space and deserve to be immediately ruled out.So any alarm bells over the ominous-sounding announcement to “develop” the Bught should at this stage be muted.

Even so, despite the positive and reasonable sounding tone of what has emerged so far this is still well worth the watching.

Lessons should be learned from the Gathering Place fiasco.

Any proposals for changes to the Bught should be at the front and centre of public scrutiny right from the off.

There can be no backroom discussions by councillors and officials which remain a secret and there can be no obscure and poorly advertised displays of what’s planned where virtually no one turns up.

Councillors who understand how important the Bught is to the people of Inverness should be on top of this and keeping people informed all the way.

And consultation must mean consultation, not a charade which ends up with the council trying to claim public endorsement for decisions they’ve already made.

If these plans do take shape from day one of their appearance they should be the subject of intense scrutiny and public debate.

The absolute priority should be to retain the freedom to roam and relax and enjoy an expanse of green space away from the madding crowds.

And the council must get the message loud and clear, that if the majority of people back the “if it ain’t broke don’t fix it maxim”, that’s how it must be.