EVER since it was announced two days ago that there would be no restrictions on numbers attending the Rangers v Malmo European Champions League match at Ibrox on Tuesday night there has been a mad scramble for the 51,000 tickets available.

And “mad” is how many people would have described it until very recently, and some no doubt still would.

A huge number of people descending on a st 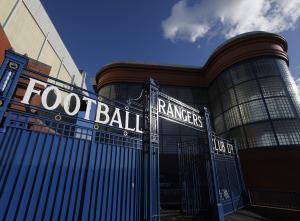 adium and sitting in vast crowds right next to each other, with not a face mask, a yellow social distancing marker or a bottle of hand gel anywhere in sight?

And none of them inclined to stick by the guidelines which applied at socially distanced church services until very recently when members of the congregation were required not to sing to restrict the possibility of virus laden breath transmission?

Some people have a poor impression of football supporters, and it has to be said Rangers supporters in particular, but even they would concede that by the law of averages they cannot all be wildly irresponsible, reckless lunatics.

Responsible family men, and women, will have pondered whether it is sensible to go to the game given the repeated Government assertions that, whatever the outcome of Tuesday night’s match, the virus certainly hasn’t been beaten.

And they have set all doubts aside and will be heading there nose to tail in their tens of thousands.

So this sell-out match goes ahead. And it can only be seen as symbolic of the the virtual wipe-out of the rules, regulations and restrictions which have governed our lives for the past 18 months.

The decision on numbers attending football matches was, very strangely given her track record, not taken by Nicola Sturgeon. She has passed it on to local councils.

And, under enormous pressure to accede to club and supporter demands, what were the humble members of Glasgow City Council expected to do when faced with giving a verdict on the numbers  attending the Rangers match, other than allow all gates to be fully opened.

They did not have the knowledge or data to start messing around with numbers and deciding who should be allowed to sit where. The only option they had, even if some may have had misgivings, was to throw their hands in the air and say, “Let them get on with it”.

The same full house ruling applies to Celtic, who also have a European tie later next week.

It’s almost 18 months and 200 or more coronavirus articles ago that I last mentioned a Rangers match here.

That was a year last March, just days before the covid crisis began, when along with a relative I attended another match at Ibrox, which was the very last major sporting event to be held in Europe. Rangers v Bayer Leverkusen went ahead but on the same night in the same competition all other matches in other countries had been cancelled.

At the time no one knew what really lay ahead. Less than a week later the plague hell with all its bewildering and frightening ramifications descended with full force.

Now, fully vaccinated and without hesitation, a couple of us are joining in that mad scramble to get a ticket for Tuesday night. It won’t be easy, because the demand is colossal and Rangers could sell out the stadium twice over.

But the focus now for many is entirely on joining the throng and virus related concerns just don’t enter it.

And neither does the wisdom or otherwise of the hitherto ultra-dominant Nicola Sturgeon. She has very definitely taken a back seat and despite her list of forthcoming “updates” I hope by and large she stays there.

The vaccine has changed everything.

It will be very difficult if not impossible from here on in to take whatever rules still apply seriously.

If huge crowds of people can mass inside a football stadium what can be made of anything that’s left?

Face masks? I suppose we’ll have to go on wearing them for a while yet in stores and some other indoor settings. I just hope that those folk who still walk about empty streets with their faces almost fully covered, many of them young people, begin to realise how stupid they now look.

But everything else has pretty much gone, and will be adhered to only by people, other than those with particular medical conditions, who have been psychologically damaged by virus terror over the past 18 months and will probably need some form of special counselling to get over it, if they are able to.

Will there be, as some people suggest, further lockdowns ahead, with the various variants floating around?

It’s impossible to see that happening, under any circumstances. Sturgeon has followed Boris Johnson in coming to the only sensible conclusion that the virus has not run its course but we just have to live it.

Thousands, vaccinated or fully vaccinated, will attend that football match on Tuesday night and that’s just one example of the return of social normality and people accepting they “have to live with it”.

There might be scorn in some quarters about football supporters setting an example to others but in this case I’d say that applies. Any minor, fractional risk remaining of developing serious illness from covid has to be balanced against returning to the way things used to be, which includes the right to attend and shout yourself hoarse at a football match.

Normal life has returned. If I can do so I will get my match ticket and pick up where I left off, 18 very long months ago.