TWO Americans on holiday I met this week were bowled over by Inverness, and particularly “the jewel in the crown” riverside.

They had already spent time in Edinburgh and Glasgow, time they considered wasted when compared to the Highland capital and the other parts of the Highlands they’d seen.

Meeting Americans in Inverness? The city used to be flooded with them. Coach tours of elderly US gentlefolk were the summer mainstay of many hotels. 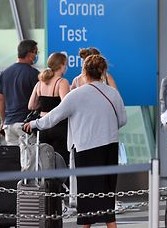 The two men in their 30s I met had boldly struck out from West Virginia three weeks ago and are due to return on Sunday, an experience they are not looking forward to.

“Being here is worth it, but getting here was an absolute ordeal,” said Jason, holding his head in his hands in mock, or semi-serious, despair. “So many tests, so much delay, so much bureaucracy to navigate. Whatever country you’re going to, travel is still a nightmare.”

Neither were the challenges confined to New York and, in their case, Edinburgh. They had to change planes en route at Schiphol Airport in Amsterdam.

“And there it seemed we had to go through it all again,” said Hugh, of distant Scots ancestry. “More tests, more delays, more bureaucracy. All in all, it’s quite a tough experience.”

Young, carefree and resilient, if they had found US-UK travel a dificult test, it struck me as scarcely surprising that many of us have set aside our passports for the foreseeable future.

I still have a travel voucher, somewhere, for a paid trip to the Far East, where countries are only now reaching the peak of the coronavirus crisis.

No refund was available. When or even if that ticket will be used very much remains to be seen.

Our riverside conversation inevitably broadened out to the situation in Afghanistan and the humiliation which has descended on their superpower nation.

“It’s been impossible to avoid,” said Jason. “The US cutting and running like that. What it’s like at home I don’t yet know but even over here it looks and feels pretty bad. An American abroad used to feel pretty safe, that his country had his back. Who knows what it’ll be like in future.

“A year ago I thought Trump was the worst president we could ever, ever have. Now we have Biden. And it’s hard to believe that when I thought that about Trump, turns out I actually was dead wrong.”