A NEW opinion poll which found support for independence was at 55 per cent merited a 1000 point size headline in the National, which is a typographical way of saying it stretched from the top of the page to the bottom. With just the number 55 on it, and a peculiar little image which was intended to look like a “skyrocket”. Hence the inside page headline, “Support for independence skyrocketing!”

All very clever, or very clumsy I thought, although it might have shifted a few extra copies of the rag to the gullible.

But that’s what the cheerleading voice of nationalism is now reduced to. Giving the results of a single opinion poll the “Kennedy Assassinated” or “Diana is Dead” treatment, only more so.

Given the moribund and disillusioned state of the independence cause at the moment the editor of the National admittedly has the most difficult job in journalism trying to keep readers on board. You can only carry yet another announcement from Nicola Sturgeon that yet another “new independence campaign” will begin (this time in the spring) so often before your daily audience gets fed up and hurls the paper aside in anger and frustration.

So this 55 per cent figure was seized on like manna from heaven.

It came from the same organisation that polled support for independence at 58 per cent last year. Nats were in ecstasy then. But it didn’t last. Foolish predictions that the SNP would win virtually every seat in Scotland in the May Holyrood elections proved hopelessly wide of the mark. They didn’t even win a majority.

Expectations had been set so high that this was, at the very least, a serious disappointment to many and was the beginning of the downward spiral of malaise that goes on to this day and will no doubt continue. 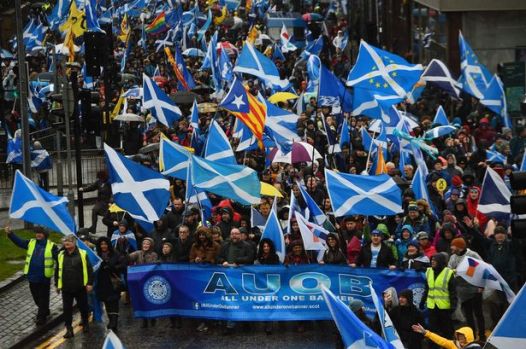 As for the National, they got carried away with that poll and their presentation in itself undermined its credibility.

Support “skyrocketing”? Why? What caused such propulsion from a series of polls which put support for independence in the mid or upper 40s? Boris Johnson? He has had a difficult couple of weeks, but what’s new there?

If I saw claims that support for the Union had “skyrocketed” without a blindingly obvious reason I’d have similar doubts.

The poll was carried out by random phone calling which was supposed to have been “demographically weighted”. But random is random. The kind of thing double glazing call centres do.

But the giveaway for me was that when asked about a list of what was uppermost in their thoughts at this time, a majority of respondents put “the constitution” second from the top.

Is that remotely credible as being representative of the population at large? Just three weeks before Christmas, and with everything else that’s going on, from health and education to winter deepening the potholes in the roads?

Is “the constitution” really at the forefront of everyone’s thoughts at this time?

Skyrockets, and pigs, will fly.

So the poll, we can reasonably assume, was a freak, or an outlier, to use the pollsters terminology.

However, in these current barren, bleak times for the independence cause, we shouldn’t grudge the nationalists anything that might put a seasonal spring in their step for a day or two.

Not that in their present downcast and frustrated mood, seeing the pointlessness of it all, they’ll be stepping out on any of their futile and time-wasting marches again anytime soon.

2 thoughts on “One dubious poll and the ‘Independence Now!’ cries arise again from furiously frustrated nationalists”