A CORRESPONDENT mailed yesterday to ask what are the chances of a group of Ukrainian refugee children being brought to Scotland by a charity group along with Ian Blackford being met on the tarmac by Nicola Sturgeon wearing a blue and yellow face mask.

Quite high, I would have thought.

Blackford, as previously reported, for some reason had thought it necessary to personally accompany the charity group, with which he has some kind of link, to Poland to “bring the children back”.

And he didn’t merely insert himself in this initiative by quietly registering as a passenger with the intention of going along to see if there was anything he could do to help out, which would have been highly unlikely in any case.

No, not Ian Blackford.

He appeared on BBC Radio Scotland on Sunday to inform the nation of the trip he was making to “bring the children back”.

Whether or not he intended to arrive on home soil to meet a battery of photographers holding a child in each arm is unclear.

Whether or not Sturgeon would have been alongside him handing out sweets and waving to the cameras in a specially made dress comprising Saltires and the Ukrainian flag is also unclear.

But both scenarios were perfectly, absolutely possible.

Unfortunately, things have not gone according to plan for the Child Refugee Saviour.

On his Twitter site yesterday he said: “Although agreement on providing sanctuary in Scotland has been agreed and announced by the UK Govt last Thursday not all the paperwork has been signed off on. The welfare of the children must come first. I will work with all to make sure this is brought to a safe conclusion.” 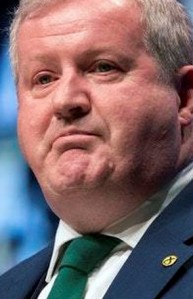 That could, possibly, at a stretch, be construed as a neutral statement. More likely, the reference to “UK Govt” and a failure over “paperwork” in the same sentence could equally be construed as an attempt to link the two. And no one in the SNP will ever miss out on the chance, under any circumstances, to blacken the reputation of the UK Government.

In any event, the reaction to Blackford’s Twitter site statement was clear enough among some of those who read it.

“Given the UK Gov’s notorious reluctance to help people in need, including kids, please keep the pressure up and in public view. Bad publicity for UK Gov might work where Scottish appeals to humanity don’t. Thanks for all you’re doing.”

“Thank goodness you’re able to keep tabs on this. Unsurprising but depressing to read of bureaucratic delays.”

“This is so disgusting I’m completely choked.”

“This is a farce. UKG need to stop playing games with these kids. It’s Afghanistan all over again. Shame on them. So tired of these decisions being made by a foreign neighbour. We need to be a normal nation again, able to get things done ourselves.”

“Yet again  @pritipatel and  @BorisJohnson ’s  @Conservatives government are incompetent and just trying make more hell for orphans who are already terrified leaving their country.”

“UK government is a damned disgrace, they can’t even get that right.”

But this had nothing to do with the UK Government. A form that should have been sent by the Ukrainian government to the Polish Ministry of Family and Social Policy, needed to release the group, was not sent in time. That and that alone was the cause of the delay.

The children are now expected to arrive on Wednesday or soon after. After a terrible trauma they face a difficult time ahead. But they will go to naturally welcoming homes.

Whether or not Blackford will be there to greet them is unknown.

But you can be sure he’ll have plenty to say about it when they do arrive.

He by then may have moved on to some other publicity grubbing attempt in trying to show how SNP Scotland – and Ian Blackford – is so kindly and compassionately different to the callous, heartless Westminster Government, which is currently working on the logistics of taking in 200,000 Ukrainian refugees, rather more than the planeload of children that he has so fervently attached himself to.

Maybe this is a is a time to partly suspend cynicism, but it’s difficult amid the utterly cynical and brazen virtue signalling of the Child Refugee Saviour and his pathetic SNP acolytes in their attempts to use the war to stoke up the case for independence. They have shown themselves as entirely beyond contemptible.

But now I am convinced. When these kids arrive on Scottish soil after travelling up from London, Sturgeon will be there in her new Saltire/Ukrainian dress waving to the cameras, and handing out the sweeties.