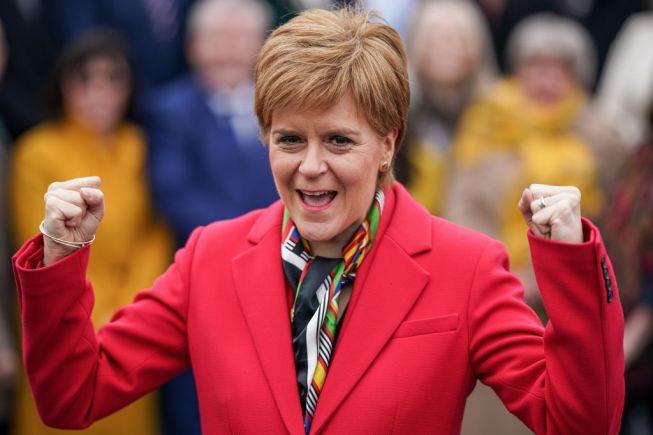 THE SNP inform us: “Nicola Sturgeon leads mockery against plans to return to imperial units”.

She said of the UK Government proposal announced at the weekend: “Those whom the Gods seek to destroy they first make look utterly ridiculous.”

The First Minister has been lying low for the past week or so because of covid.

She would appear to be well on the mend now she’s in jauntier, mocking mood.

Personally I identify more with pounds and ounces rather than grams and kilos, and as as there’s only three inches of difference between a yard and a metre that doesn’t make much difference either way. And road signs obviously convey distances in miles rather than kilometres so there’s no change there anyway.

However most people under 50 will be quite comfortable with grams and kilos and certainly everyone under 40 will.

The essence of this proposal by Boris Johnson seems to be that stores and shops and market traders will have the option of selling their goods in pounds and ounces if they wish, rather than run the risk of being prosecuted if they do. That seems sensible enough. But mockery and Johnson go hand in hand these days for many, and certainly for Sturgeon and the SNP, so no opportunity is scorned.

But it’s a storm in a half pint teamug, no more and no less.

If this goes ahead it’s difficult to see how even the nationalists could try and whip it up into a major issue of divisiveness between Scotland and England. But with their usual mix of fabrication and inventiveness, they’ll no doubt try.

But as we head for June, Sturgeon has a few pounds or kilos of much bigger fish to fry.

She has not relented for a moment in her insistence that she will hold another referendum in 2023. In fact she’s repeatedly doubled down on it.

But even her most ardent supporters now acknowledge that almost halfway through the year, it really is time to get a move on. With the level of preparation and planning and inevitable legal challenges and confusion involved, time is rapidly running out.

For many of us she’s an untrustworthy and discredited figure anyway. But will even her endlessly patient followers accept a situation where Sturgeon continues dribbling on about indyref 2023 and does nothing about it?

The SNP’s much delayed “prospectus for independence” providing hard and firm detail on the independence plan was supposed to have been revealed “in the spring”. Then it was announced it would emerge from the woodwork “after the council elections”.

And still there’s no sign of it, or even a hint as to when it’ll appear.

Mockery of Boris Johnson, irresistible though it may be to her, should not be high on Nicola Sturgeon’s agenda at the moment.

A groundswell of mockery which could turn into an avalanche is heading in her direction just now.

As things stand, and while Sturgeon has her mocking chuckle at Johnson, this is the woman who hopes to persuade a majority of people in little more than a year to vote for independence with:

No idea what currency we’d use.

No idea who would pay our pensions.

No idea about the implications for mortgages and savings.

Or the prospect of a hard, passport controlled border between Scotland and the rest of the UK.

Or the implications that would have for trade, and more directly for many people, for their jobs.

No idea on how we’d compensate for the loss of the extra £2,000 per head we receive in public spending compared to people in England.

Or how much it would cost to set up a new army, navy and airforce.

And these are just a few of the unanswered questions in advance of next year’s referendum she’s so insistent about.

And just over six months from “independence year”, Sturgeon seriously thinks she’s in a good place to win a 2023 referendum?

Mockery? Never mind having a sarcastic giggle over Boris Johnson and his pounds and ounces. As things stand now it’s the utterly delusional Queen Nicola who deserves to be assailed by mockery, an imperial ton of the stuff.